Around 9 PM on Friday night, I was starting to get a little nervous. I was about two hours out of Syracuse and about three hours of walking into the Black River Wild Forest, a 130,000 acre forest preserve in the southwestern Adirondacks. We had been expecting a relatively easy hike in for the first day of our trip, but instead had found the trail untouched and hard to follow, with unmarked turns and snow-hidden creeks slowing us the entire way. It had gotten dark about an hour earlier, meaning that we were making even slower progress – and that we kept having to backtrack, mistaking small clearings and gaps in the woods for the narrow trail we were following.
But soon enough we saw our lean-to – a squat little shelter left over from the 30s, when the CCC remade the Adirondacks with federal funds. I was thrilled. The only thing I cared about was getting into the shelter and going to sleep for the night.
Emily Shannon, though, had some other things on her mind. “See that rock?” she asked, pointing to a small boulder off the side of the trail.
I was confused. “Yeah?”
“Someone had to put that there,” she said. “What an idiot.” 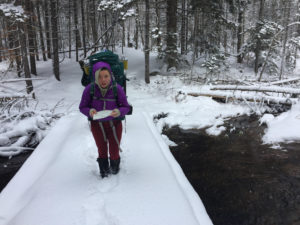 So goes hiking with SUOC’s newest backpacking leader, who passed her ghost lead with flying colors this past Saturday. With a small trip to Chub Lake (and some outstanding backcountry pizza), Emily demonstrated her abilities as a backpacker and a leader, and did it in the traditional Em Shan style. With this trip, Em is now a leader in both three-season and winter backpacking, and is excited to take on her role as Backpacking Chair in the year to come. 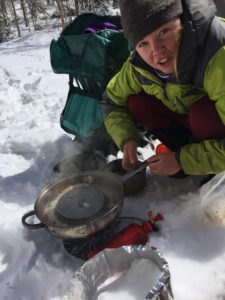